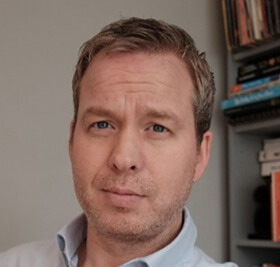 Can you tell us a bit about yourself and your role at the Grafton Group?

I am the Group IT Services Director. Grafton, as a company, has a number of business units in different countries which all run autonomously, but a few years ago, we made the decision to share IT services for things like communication and HR systems. This means that I am responsible for the building, running and delivering of all of the shared IT services across the whole company. Most of it is infrastructure or technology related, so it includes things like running Office 365 and running collaboration tools across the company.

Can you tell us about your winning Real IT Awards (RITA) entry for the 'IT Project Team of the Year', as well as your role in the winning team?

Even though we were a single group, there was no one easy way to communicate across boundaries, as we had over 25 email systems, so we wanted to break down some of these communication barriers. The project, which we named Grafton 365, was all about taking the disparate communication systems that every one of these individual business systems had before, and moving them to one single Office 365 based platform. Whilst this involved a technical migration for over 7,000 employees, it also involved a business process migration, as we had to help the different teams adopt some of the new improvement tools that came with Office 365, such as Skype for Business.

The reason we thought it was a good entry for the RITA, was because the team wasn’t just a normal IT infrastructure set up, but it also involved the IT and HR departments of every single business involved within the project. We effectively formed a virtual team of all these people, as whilst the technical and adoption side of migration had to work individually for each business and was customised to their needs and challenges, at the end of the day, we all had the same end goal. As you can imagine, working as a virtual team, and the management that comes with it, is not easy to achieve. However, the fact we got everybody to work together well, and we achieved the outcome we wanted, is why we entered the Awards.

I was the project sponsor, meaning I was ultimately accountable for the success of the project and making sure we had all the right resources, in the right places, at the right times. I also built the team of suppliers, and SCC, who we used for our system integrator played a big part, providing the expertise on migration and training. So, in a nutshell, my job was to make sure all these different groups were working together properly to get the project done.

What do you feel are the benefits of winning a Real IT Award?

It has certainly been highly motivational for the IT guys in Grafton. One thing the project did was bring together the different IT communities across the company. With this project, we all had a common goal, and so the collaboration and team work in-between all the groups was massively increased as a result of the project. Winning the award was a great way of recognising and reflecting these efforts, and was almost like the icing on the cake.

Did you do any additional marketing or PR around winning the award?

SCC were a big part of the story, and because they were so flexible in their approach to resourcing and managing the project, we wanted to make sure they got some recognition. The project’s success at the Awards allowed them to pull together some internal recognition communications inside the company.

How did you find the Award ceremony last year?

We really enjoyed it. What’s great about the Awards is that it is well organised, the venue is always nice and it is set out in such a way that there are opportunities to meet and network with new people. More generally, some of the guys we brought along had never been to an awards ceremony before, so for them it was a fantastic experience to get dressed up, and then to actually win the award created a real buzz.

By bringing the award back to the office, even those that weren’t there on the night, but had contributed to the project, got a sense of recognition. I think by winning and communicating the success internally, it showed people that if they’ve done a good job, they should consider putting it forward for the awards. Grafton also had another project submitted on the night and that, in itself, was also very rewarding.

Are you planning to enter the Awards again this year?

Yes, we will be. In November, the leaders from the various business units will meet to review the projects and service delivery stories from all the different groups and we will agree between us which ones we think are the best to put forward. That’s how we decided our infrastructure project and Office 365 project last year.

We evaluate the projects on their merits, whether it’s a small or large project, doesn’t matter. Just because a project hasn’t cost millions of pounds doesn’t mean it’s not a worthy candidate for the awards, as it could have still added a huge amount of value to the business.

Do you have any advice for people entering the Awards this year?

Firstly, I would encourage everyone to enter, because it is a fantastic thing to get shortlisted for and a great night. The submission process does take a bit of time, but the effort put in is well worth it in terms of the recognition you get for your team in return.

In terms of creating your submission, my biggest word of advice is to think about making sure your entry is described in terms of the outcomes. So, for example, whether the outcome was a brilliant technical achievement, or something that added financial benefits. I think it is important to focus on how the project helped achieve the outcomes as well as the technical challenges faced and the process itself. Through entering the Awards, it really does make you think about, and reflect on, how the project made a difference.