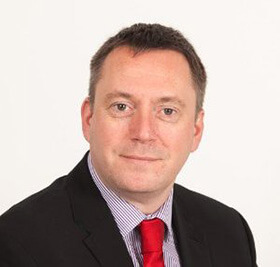 Can you tell us about yourself, your role, and how you got involved with the Corporate IT Forum?

I’m the IT Director at Opus Energy. I’ve been in IT my whole career, so pushing 25 years, and in the energy sector for around 17, here [Opus Energy] for just under 14. My role here has changed, as I’ve been here since the very start, it was quite a small team and we did a little bit of everything; I was primarily a developer, designing and building our line of business applications. As the department grew larger and larger, I took the top job three years ago. It was about then that we started looking at a project called Broker Pricing Portal, which we entered into the Real IT Awards last year and we won the Innovation in Business Award. Following that we signed up [to the Corporate IT Forum] last summer.

What is it like working in a young, rapidly expanding 21st century organisation? How does this differ from previous organisations you've worked for?

Very different. Like I said, I was here from the start and all of us who have been have had to make some adjustments over the years. That’s one of the things that happens when you’re working in a growing organisation, especially when you were there when it was very small. I was there when there were five of us (that’s not IT, that’s the company). When we went live as an organisation, when we took our first customer, we still only had a workforce of 10, maybe 15, people and most of us had worked together previously. A very small environment to start with that went from that to a 500-strong workforce in the decade that followed, so it’s been quite a journey. We’ve coped but it’s fair to say there have been a few growing pains along the way.

When I took on the IT department  it was a small reactive IT team we had in place which was very good to get us going and but had been surpassed by the size and the expectation of the company as a whole. So most of my efforts, then and now, have been to increase capacity but trying to not lose that “small company” mentality when it comes to flexibility and reactiveness. It is a very different to organisation to where I’ve worked before. I’ve got a bit of an interesting CV. I was at Barings and Enron when they collapsed and I’ve worked at Lloyds of London during reconstruction and renewal. I’ve come from very large organisations that were struggling to a small one, originally, which has expanded, so it is a complete change for me. The issues we have are always somewhat attributable to growth, which I guess is always a first-class problem to have.

I’m a techie at heart; that’s my background. However, it’s not technology that guides me. The only sort of advice I seem to give out, if anybody asks me for it, is that in IT you need to be at the core of the business. Technology, for its own sake, can lead to a poor impression of IT departments being a very expensive place for some toys.  We look at technology as an enabler, but we’re rarely on the leading edge. So things that motivate me…winning that award was a real high-point – a perfect example of technology being used correctly to drive our business forward. When our systems are at the heart of a new product the company is offering, I feel we are offering true value, returning benefits that are many multiples of our budget, and that’s what does it for me.

What major projects have been recently completed or are underway at your organisation?

Where to start…over the past twelve months, we’ve completely replaced and relocated our service infrastructure and replaced our Wide Area Network (WAN), which was an incredibly intensive piece of work, but we’re pretty proud of it. We entered that in for an Award, which has been shortlisted [for this year]. So that involved buying an entire new server file and putting it in a co-location facility and migrating all of our systems to it and building a robust system to make sure that all of our offices and data centres are connected as resiliently and as high-performing as they can be.

We also recently launched MyOpusEnergy.com, which is a self-service portal aimed at our customers and brokers and it offers services that we believe to be market-leading. It’s going to be our base-camp for an ongoing aggressive digital programme. Alongside that, we are in the energy industry, which doesn’t shy away from change, so over the past twelve months we’ve had five projects, essentially mandatory, just to react to the changes in the market that the regulators are promoting.

As Opus Energy's IT Director, how are you influencing the products, experiences and services that your organisation offers to its customers?

This is something I’m trying to focus on more. We rightly aim to be reactive and pragmatic and be a support function to our operational and commercial arms, but there’s a balance. As IT Director, I recognise my responsibility to present options for a more strategic direction and highlight opportunities that advances in technology can offer. I’ve tried to make the time to put together a strategy which was recently done and presented to Senior Directors, all based around our digital customer programme. This is where, sometimes, IT does need to take the lead; it needs to say: do you see what can be done out there? Do you see what other people are doing out there? We’re trying to use MyOpusEnergy.com as a base-camp and put more and more offerings directly to our customers and our partners in the industry.

In addition, with the staggering progression of mobile devices, there is a real opportunity for a step-change in how businesses interact with their energy suppliers and we want to be in the vanguard. Luckily, here, it’s rarely a problem to get engagement from the Department Heads and Directors, quite the opposite in fact. It’s my job to put a long-term plan in place.

What specific challenges face you as a CIO of a regulated business? How does this impact the technologies that you implement, your IT budget and how do you work with this?

Good question this one. It is one of my largest challenges without a doubt. The regulators are trying to do many things: trying to improve competition, protect customers, ensure an efficient market, improve infrastructure even. They are all goals we obviously support wholeheartedly. The problem comes with the disparate capabilities between the largest firms in the market and the smallest. I think we operate a little closer to the largest these days, but in terms of IT budget, for example, I dare say we are nowhere near. It really does become a little bit of a clash, between things we want to do and things we have to do. So we do comply with every initiative but also look at the upside of it; change often presents opportunity and I believe we can be quicker, react quicker, and change quicker to a new way of working.

My role is just steering that path to compliance, with a solution that is proportional to our size and capability. Sometimes it comes as a trade-off between automated and semi-automated processes, which can cause tension between the IT and operational departments; we find a way. You want to invest your IT budget in things that will take your business forward and it’s just finding a way to turn those regulatory changes into something that will help you do that.

Can you give us an insight into a day in the life of an IT Director?

No day is the same. But I tend to try and structure them the same, and I’m afraid I am one of those people who do check their email when they’re out, but I won’t respond or react to them.  So, when I come in in the morning there’s just that list of things that you either have to just file and forget, delete, or actually do something with. So, I work those out and then come up with “must-do”s for the day. That has to be achievable because something will come along and change the topic of the day and you have to be able to react to that. I don’t try to be too ambitious with regard to what I’m going to get through that day.

I’ll have meetings and those meetings will either be catch-ups with one of my Heads of Departments, or I sit on the majority of the project boards we have here. I’m either sponsor of a project or, if not, I’m a stakeholder in them, so the Project Manager will give us an overview of the project progress and everyone will agree that it needs something doing with it or it’s fine to carry on in the direction it’s going. You take those forward; you might pick up actions from them. Then, as I alluded to before, it’s just a case of trying to dig out some larger periods of time to look at strategies, planning and design. That’s the real battle I find in my role – just finding a few hours to not just be reactive or in the detail, but to actually put together more strategic plans and really get down to trying to push the IT department, and therefore the organisation, forward. You really just need to somehow find that time.

How do you keep up with technology trends?

I struggle to be fair, but more often than not, it will be through one of our major suppliers who will say: have you considered going in this direction? You then need to step back from them and not entirely trust them. I don’t feel the need to have my organisation on the latest thing, but it is my responsibility to keep an eye on the horizon I would hate to be responsible for missing a major opportunity for advancement or cost-saving; equally I would hate not to be ahead of our competitors’ offerings.

It’s one of the things the Forum has helped with, talking to counter-parties, talking to guys in my position in other areas. It’s not so much the trends more the getting the feeling for what’s real and what’s not by understanding what other members have done. That’s what’s important to me; yes, I can understand the trend, but what can it do for me? … is the question I like to ask.

What do you value most about the Forum - is there anything you've found particularly useful?

Probably too many to pick, but hearing other members’ experiences; it’s a really helpful pointer when people talk about their move to Cloud or their move to Office 365 and did it actually get them where they’re wanted. It’s just really useful hearing that first-hand experience.

Any final message to the membership?

Just make the time, somehow someway, to get your head up and your head down to plan and to think. We’re proud to be reactive, but I feel you need to be heading somewhere; it doesn’t matter if you change your mind as to where that is, but you need to have an aim. Plus, just don’t worry about things so much; it always seems to work out in the end.